Student housing is a ‘big deal’ for Bastyr University in Kenmore 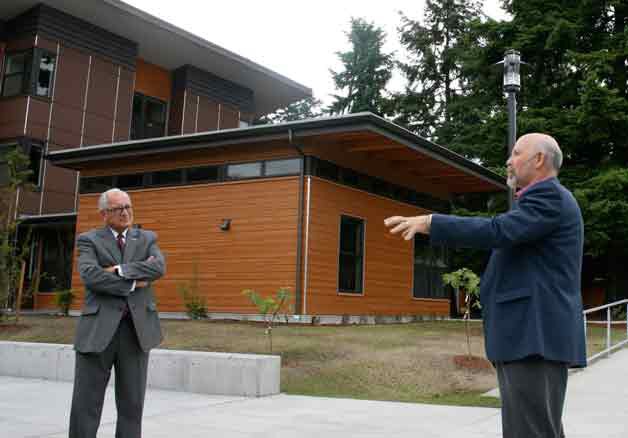 When Bastyr University formally celebrated the opening of its new student housing June 22, university President Daniel Church noted the construction was the first addition to the campus since the natural health arts and sciences school took over its current home.

“It’s physical evidence we are going to stay here and be a part of this community,” Church said. He added that, at the same time, the buildings will create a unique Bastyr community for the approximately 132 students using the dorms.

“This goes far beyond just housing… It’s a big deal for us,” he added.

Consisting of 11 three-story buildings, workers broke ground on the $15.3 million project in May 2009. According to Bastyr’s Director of Facilities Daniel Clark, the structures should be the first independent university housing project to earn Platinum certification for Leadership in Engineering and Environmental Design (LEED).

Clark said to the best of his knowledge two other schools — one being Ivy League Harvard University — earned Platinum LEED certificates for housing projects, but only with the help of big-name corporate sponsors. Bastyr appears to be the first to reach the achievement on its own.

During a press tour of the buildings, Clark and others went through a long litany of steps Bastyr and contractor Schuchart took to reach Platinum status.

A few examples: Warm water flows through plastic tubing heating the floors of the buildings. Each building contains two sets of washers and dryers, bathrooms in every room and a full kitchen. Yet, the buildings contain no traditional water heaters. In the past, Clark has talked about harvesting rain water, with so-called grey or non-drinkable water, being reused throughout the complex.

According to Schuchart’s Joe Giaudrone, the company recycled 96 percent of the construction waste generated by the project. Benches and other items were made from scraps and leftovers. Actually, recycled items are evident throughout the dorms. Chairs and benches are made from the webbing of old car safety belts. Kitchen countertops consist of bamboo and recycled paper.

Outside, students are given ample space to store bicycles. Several 60-year-old pine trees tower above the complex. According to Clark, they were not just left alone, but specially protected during construction. All these steps, verified by a third party, should contribute to increasing the project’s LEED status, according to Clark.

“The fact that this project is going to achieve Platinum LEED status, it just grows out of our DNA,” Church said, contending the dorms demonstrate what he called Bastyr’s commitment to environmental stewardship.

Before Bastyr broke ground on the dorms, the project was challenged by local environmental activists as possibly contributing to flooding problems downstream and in adjacent St. Edward State Park. A hearing examiner ruled in favor of the project and upheld the city of Kenmore’s determination that the dorm project will not create a major environmental impact.

Clark has said any water run-off from the dorms will be filtered through a bio-swale, collected in two large, underground storage tanks and ultimately released — a trickle at a time — back into neighboring wetlands. School officials contend the drainage will not affect the streams that have experienced flooding problems in the past.

Besides all the environmental features, the dorms have a number of other high-tech, modern touches. Key cards will operate door locks. But the card readers can notify residents who is at the door via cell phones and even allow those residents to open doors through the same cell phones.

In the past, Clark has said one of the most distinctive features of the buildings — the V-shaped roofs — was largely a design decision. Engineers had to reinforce the roofs to bear the weight of rain and the odd snowfall. Clark said the trade-off is that residents on upper floors will have clear views of the campus and natural surroundings. Clark also has added that the school hopes to turn any flat roof spaces into garden spaces.