After 30 years, George Schuchart preps his construction firm for ‘Schuchart 2.0’

By SAM BENNETT
Special to the Journal 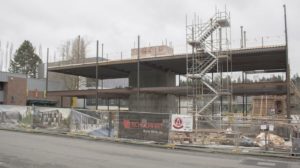 In 2001, at the depth of the dot-com implosion in Seattle, George Schuchart came up with a phrase to boost morale at his company: “Stay alive ‘till ’05.”

The idea was that, as long as he and his workers kept their noses to the grindstone for just a few years, things would work out fine. “Somehow,” he said, “we did stay alive till ’05.”

At 67, Schuchart this year celebrates the 30th anniversary of his company and is preparing for what he calls “Schuchart 2.0” — the passing of the ownership reins to several partners in his company who are less than half his age.

“They’re doing wonderful things for the company and preparing to take it to new places,” he said about the incoming ownership team.

The great-grandson of Howard S. Wright, a cabinet maker who founded Howard S. Wright Construction Co. in Port Angeles in 1885, Schuchart is part of a multi-generational family that devoted their lives to the construction industry in the Northwest.

Schuchart built out 11,098 square feet of space for AOL at Symetra Center in Bellevue.

Schuchart’s father, George Sprague Schuchart, began working at Howard S. Wright Construction after serving in the Korean War in the 1950s. Though Schuchart said his father was “laid back and never urged me” to join the family trade, the younger Schuchart was single-minded in his dedication to founding his own construction company.

With Everett roots, Schuchart chose that city to launch his company. “I always wanted to do my own thing,” he said.

In 1988, Schuchart set out to start a construction company focusing on industrial construction. Making two or three trips into Seattle each week for work, Schuchart said he quickly realized that the business had to move to Seattle.

In the late 1980s, Schuchart focused the company on tenant improvement projects. Within a couple years, he said the company was asked to build a Seafirst Bank in Monroe.

“We had to quickly develop a larger crew that could build a building from the ground up,” including a concrete crew, he said.

The Seafirst branch was a big step for Schuchart, but he said the company’s first milestone came in the early 1990’s when it was hired to do an industrial project for Boeing.

The Boeing project was pivotal, he said, because Schuchart learned the importance of gaining a client’s trust. “That’s when I realized how important one account could be for us,” Schuchart said.

While Schuchart’s work for Boeing helped sustain the company for a decade, he said that around the time of the Great Recession in the mid-2000s, which cut the company’s revenue in half, Schuchart went looking for a way to diversify his client base.

“That was about the time that we identified Microsoft as a potential client and decided it was time to spread our risk,” he said.

Schuchart, with the help of his son, Casey, secured tenant improvement jobs with Microsoft and in the ensuing years has kept a close working relationship with the company.

“Boeing has asked us to partner with them in their service program, so we have an agreement to do service work which can include the smallest of jobs,” he said. “We’ve worked in many of their facilities, and that has required us to ramp up our staff rapidly to serve their needs.” The company currently employs 150 people.

Schuchart said one sector that his company only recently has devoted attention to is multifamily construction — which has boomed in Seattle since the last recession, as tech giants such as Amazon expand.

“I think we were late to the party with our apartment work, because I didn’t see that coming and lasting as long as it has,” he said. “We decided to concentrate on that about four years ago.”

As Schuchart entered the multifamily sector, he said one key to success was developing relationships with subcontractors specializing in the delivery of multifamily projects. He said he quickly learned that business longevity comes from knowing your clients, as well as your subcontractors.

Schuchart also has diversified into projects such as the $24 million Eastside Preparatory School TALI Hall, which is expected to be finished this summer. The 105,000-square-foot building will include 15,000 square feet of flexible theater space, as well as 25,000 square feet of multipurpose classrooms, meeting spaces, art studios and music rooms.

Designed by Public47 Architects, the building will also have parking for 200 cars.

One key to forging new relationships for Schuchart was the company’s move five years ago from Lower Queen Anne to its office at Fifth Avenue and Madison Street in downtown Seattle.

“Since we moved downtown, our tenant-improvement business has grown tenfold,” he said. “The move downtown was terrific for us.”

A major benefit of being downtown, he said, has been developing relationships with downtown-based property management companies, which has led to tenant improvement and new construction work.

Schuchart also deployed the same strategy in Bellevue, locating an office in the downtown core at 600 108th Ave. N.E.

As he readies to hand over the company to a new generation, Schuchart credits some of his company’s success to his own brash optimism.

“I know the stats about how many construction companies don’t make it through their first year,” he said. “I guess, looking back, I should have been scared but I didn’t know any better. I just started with a folding table and an answering machine and somehow I got my first job.”

But Schuchart said he has succeeded by taking a conservative approach to growing the company.

“We now are focusing on trying to have a broad base of work. Our slow-growth approach seems to have paid off, and 30 years later we have wonderful clients and have built a terrific company.”