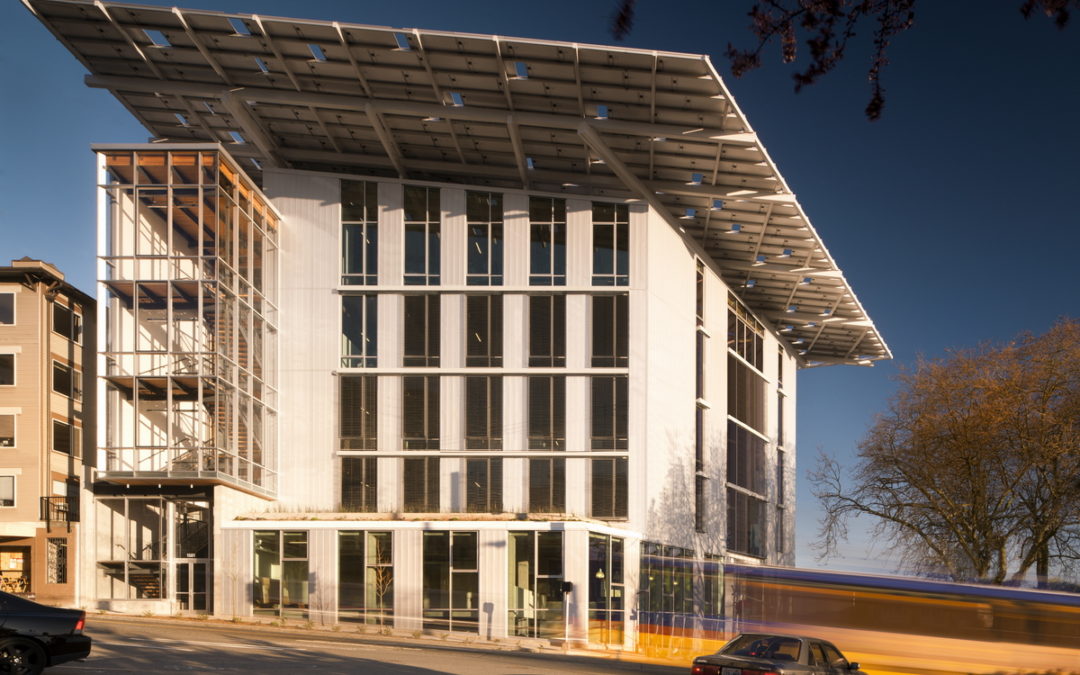 Schuchart celebrates its 30-year anniversary this year. What began as a motivated army of one is now a diverse group of 150 employees across five offices and numerous job sites. We have been fortunate to work with some of the region’s most impactful corporations, building strong relationships along the way. “I wanted to build a culture of teamwork with our clients and partners, and together create lasting projects that contribute in meaningful ways,” says George Schuchart, founder and President. “One such project is the Bullitt Center.”

Five years ago, on April 22, 2013, the Bullitt Center in Seattle’s Capitol Hill neighborhood opened its doors for business. Labelled as the “world’s most sustainable office building,” the grand opening marked the culmination of an integrated and innovative experience, one where design, engineering and construction combined in a truly collaborative effort by the team: Schuchart Corporation served as general contractor, Miller Hull Partnership as architect, and PAE Consulting provided MEP engineering services.

That the six-story, 50,000 sf office building opened on Earth Day was no accident. Denis Hayes, the Bullitt’s Foundation president, is the founder of Earth Day, and he felt there was no date better suited to launch this unique building. The building differentiates itself from other projects by revealing the innovative sustainable systems and features, creating connections between the building’s inhabitants and the building itself, and providing opportunities for education and stewardship. With the goal of delivering a net zero water and net zero energy building, the building’s sustainable features are numerous and include a rainwater harvesting system, composting toilet system, and a rooftop array of photovoltaic panels designed to produce 230,000 kilowatt-hours a year.

When Denis Hayes approached us about his aspirations for the Bullitt Center to be a “Living” office building, he charged us all to solve the issues, both known and unknown, as we embarked upon this project. Early in the process we realized that this was a significant project with the potential to change the way future buildings were conceived and built. What followed was an intensive 2 ½ year preconstruction process, where design aesthetic, functionality, system, and constructability were considered simultaneously to determine the best fit solution to achieve the project’s goals.

A building like the Bullitt Center had never been built and it was critical for us to set aside any preconceived notions and collectively work to pave a path to success. This project began by working with a team of collaborators focused on achieving a shared set of goals. “With a strong team in place you can solve for many things that are initially thought to be impossible,” said Casey Schuchart, construction project manager. “This team had the energy and intelligence to deliver Denis’ vision.”

The project had to meet a stringent set of criteria to be certified under Living Building Challenge, based upon the building’s actual energy and water performance as opposed to projected performance among other requisites. Additionally, the speculative office building needed to attract and retain tenants to make it financially sustainable. Five years in, the project is doing just that, realizing Net Positive Energy operation because of the innovative systems, both passive and active. What may be the most surprising contributor to the low energy use of the building is the energy-conscious choices that the tenants are making, including more efficient computing equipment and habit-modification. The building is also Net Zero Water. This is accomplished by a 56,000-gallon cistern that collects and stores rainwater from the site that is then filtered and disinfected to level safe for human consumption. Graywater is filtered through a constructed wetland, recharging the local aquifer.

The Bullitt Center has had far-reaching impacts to the way that Schuchart looks at projects. With safety as a priority, we have intensified of our view of the materials we use during installation with a heightened awareness of the inherent level of toxicity common found. We also seek to incorporate sustainable materials, processes and building practices into every project; while embracing any challenge with the belief that it can be overcome.

Schuchart is honored to have contributed to the Bullitt Center and look forward to it inspiring and educating future generations.